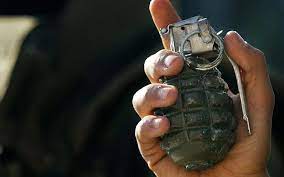 Investigations into the recovery of a hand grenade at the Borella All Saints’ Church premises revealed that a man who was employed at the church had got a 13-year-old boy to keep the grenade there.

A hand grenade was found at the Borella All Saints’ Church premises by the STF last evening.

Police Spokesman SSP Nihal Thalduwa said that four suspects have been arrested in connection with the incident.

He said the main suspect who was employed at the church had got the 13-year-old boy from a neary house, who was visiting the church frequently, to keep the grenade there.

The arrested suspects were aged 29, 25, 41 and 55 from Dematagoda, Maliboda and Maradana.

The main suspect and the 13-year-old child were produced before the Hulftsdorp No-2 Magistrate Court and a statement was recorded from the child by the Magistrate.

The other three suspects were to be produced in the Hulftsdorp No-2 Magistrate Court tomorrow.